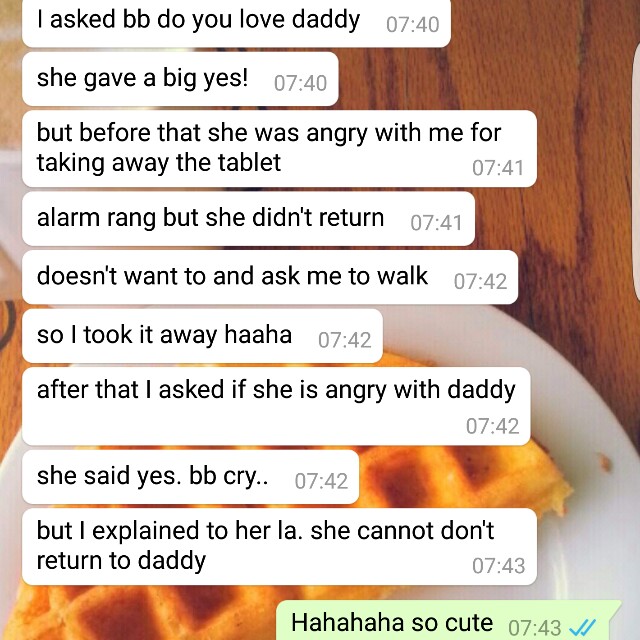 I took a cab to work while Daddy did the drop-off on his own today.

Don't want her to be in school too early since most kids come in only after 745am.

I'm loving the interaction we have her everyday.

Almost every other day, she surprises us with what she understands and what she is able to express.

Which also means.. negotiations are tough.

For example, every morning we go through the same process of trying to make her take her vitamins.

She'd say, "Don't want to eat vitamin!" And then roam around the house.

And then she'd say, "Want use the tablet."

This is so difficult to negotiate, because I want her to take the vitamins more than she wants to use the tablet.

She LOVES using the tablet, but she also has many other books and toys that can keep her occupied.

She usually returns it promptly when the alarm goes off but from time to time she'd insist on the "last one, last one" or go crazy when we take it away from her.

On one hand I don't mind because she only gets the tablet twice a day at most.

On the other hand I feel she is outsmarting me.. and I don't know if it's right to always give in to her. 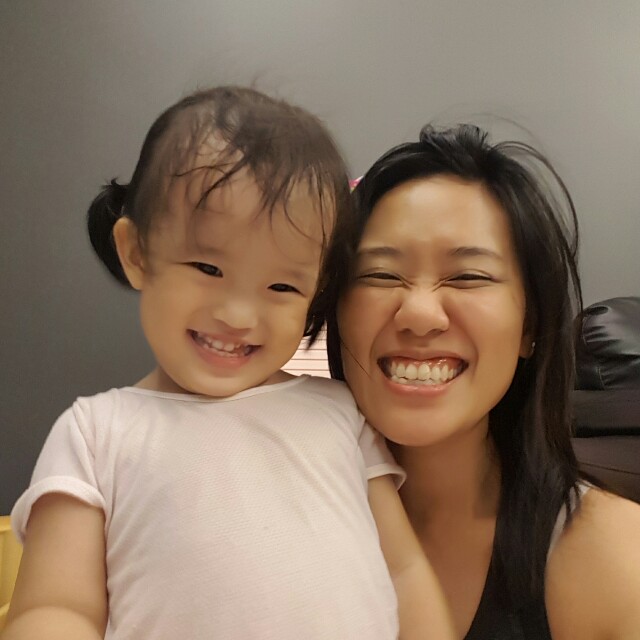 We came home to her crying in the living room.

I took her to her room while the hubs spoke to our helper to find out what happened.

What she told me was exactly what happened.

Our helper was trying to wipe her face but she refused to. Instead she ran all the way into the kitchen and tried to press the buttons on the washing machine. 😞

So our helper carried her out of the kitchen into the living room, and that was when we got home and found her crying.

We explained to her it was dangerous to play with the washing machine. Also we have told her time and again that she cannot step into the kitchen on her own.

We have a safety gate but it's not closed all the time. I told her I'm going to close and lock the gate.

I brought her to her Yaya to say sorry and the hubs explained again how dangerous it is.

👦: Remember the boy on TV? He touched the switch and.. Zzz!

(Last night's channel 8 show had a little boy who got electrocuted because he touched a switch. 😢😢 So the hubs taught her about the dangers of touching switches.)

She sayang-ed her Yaya (her way of saying sorry) and told us, "Cannot press the button! Dangerous!"

She said, sticking out her two fingers to demonstrate electric shock.

Ignore me, but that's her reenacting her "Zzz!" action.

We checked the cctv playback and found out that after our helper carried her out of the kitchen, she actually took her into the room to get wiped.

She heard us at the door and ran out to stand in the middle of the living room, crying as we entered. 😂

Alamak trying to complain to us huh.

We really need to learn how to deal with her cheekiness, but that aside, I'm amazed by how she is able to explain to me what happened.

She used simple phrases, but I got the story.

Growing up so fast!