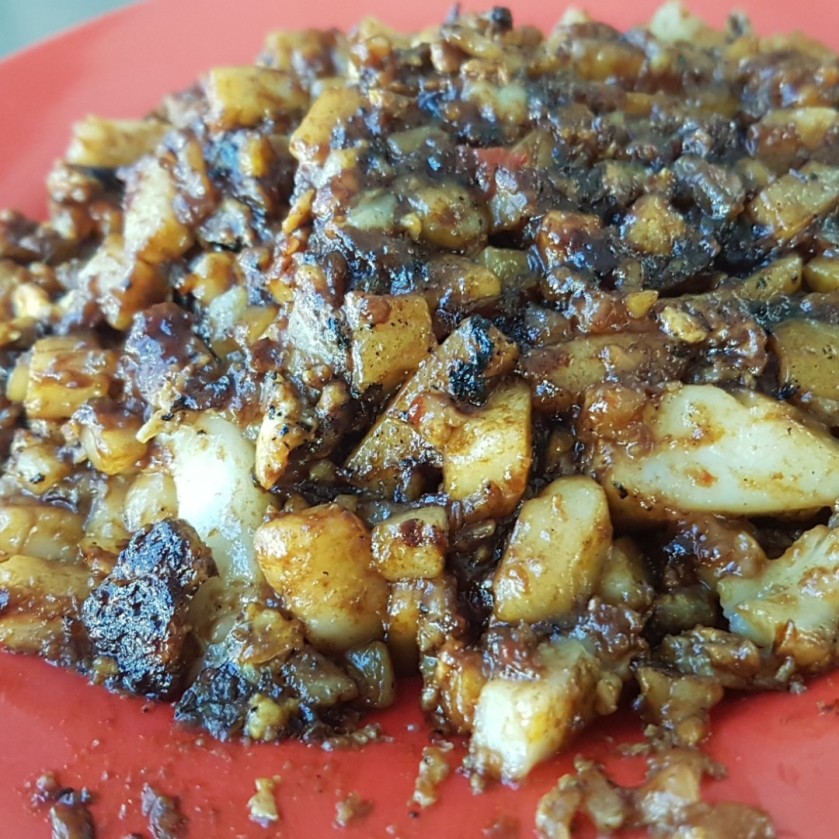 We picked a random day to take leave this month since there is no public holiday.

So the hubs suggested our favourite carrot cake at Bedok hawker centre and here we are!

This is my Michelin star carrot cake since I was a kid!

I introduced it to the hubs when we started dating, and it's now OUR Michelin star carrot cake stall – unrivalled! No other stalls can be compared to this.

And this morning we have the 2nd generation boss helming the stove himself!

Actually I'm not sure when the first generation started. 😂

Used to be an elderly man, who later passed it to (presumably) his son, whom I assume is the 2nd generation, and the last time we came, there was a younger man frying the carrot cake.

(Wah, #auntie can write so much about carrot cake. 😂)

Love the balanced mix of charred bits, chai-po, egg, carrot cake and black sweet sauce, and the aroma that comes with every bite.

Comfort food at its best! 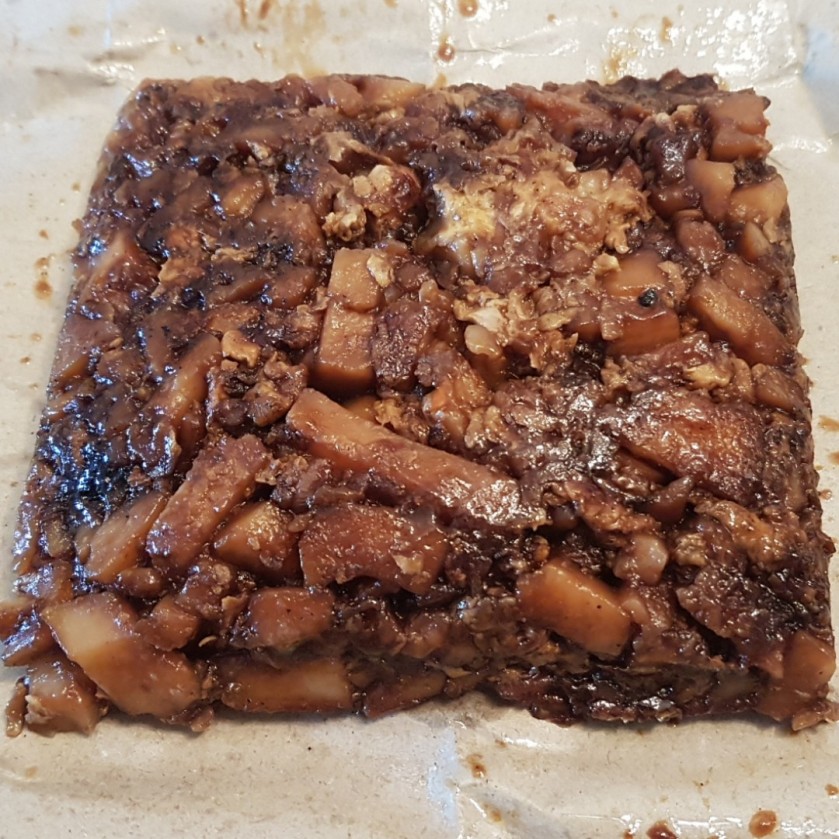 We bought a packet back for our helper and erm, another packet to share.

We probably only eat this once a year lol and can't get enough of it. 😂🤣 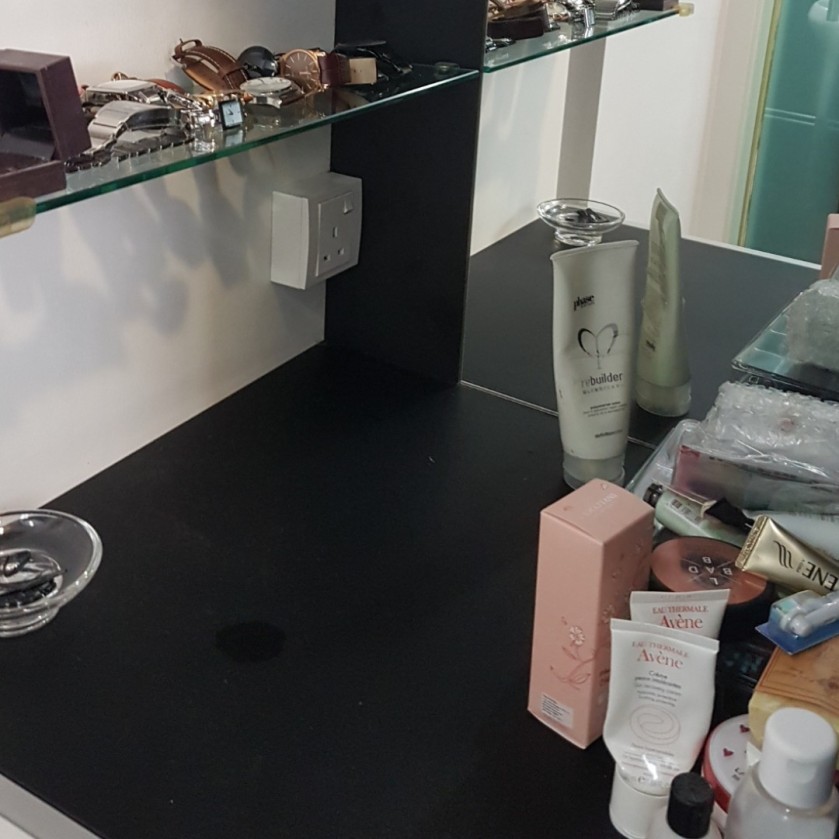 Long time no see, surface of my dressing table. 😂

Have to do this while I'm on leave, otherwise I might start and not finish it, or I might not start at all.

Not quite a NS Day afterall, because.. 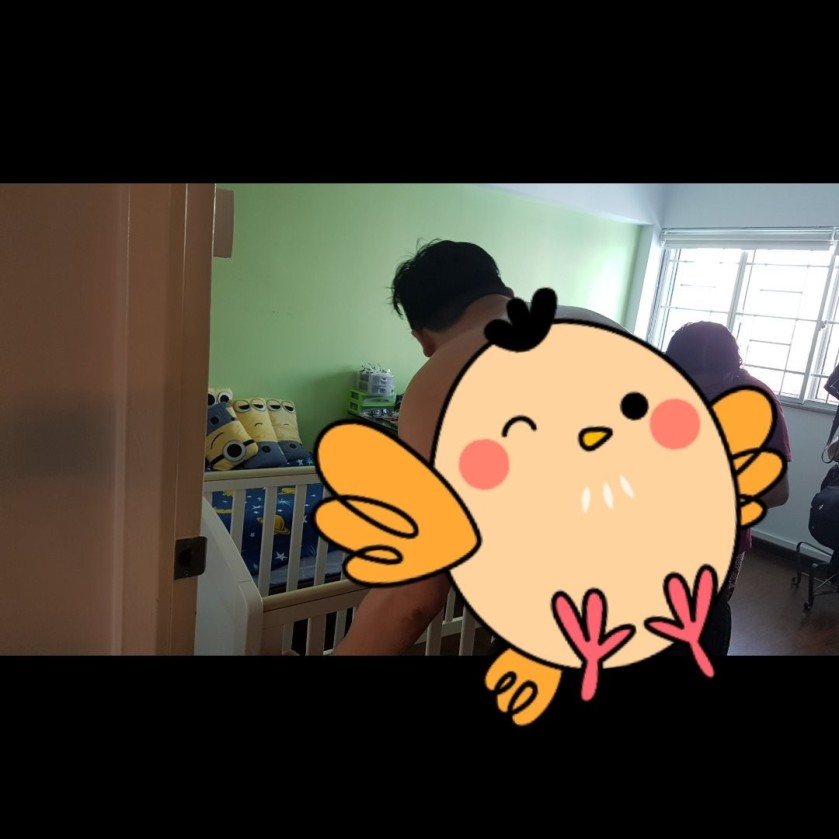 What we thought was a simple task of moving the cot from Clarissa's room to the study room turned out to be a pretty extensive effort.

Couldn't fit the cot through the door, so he had to dismantle it and fix it back again. 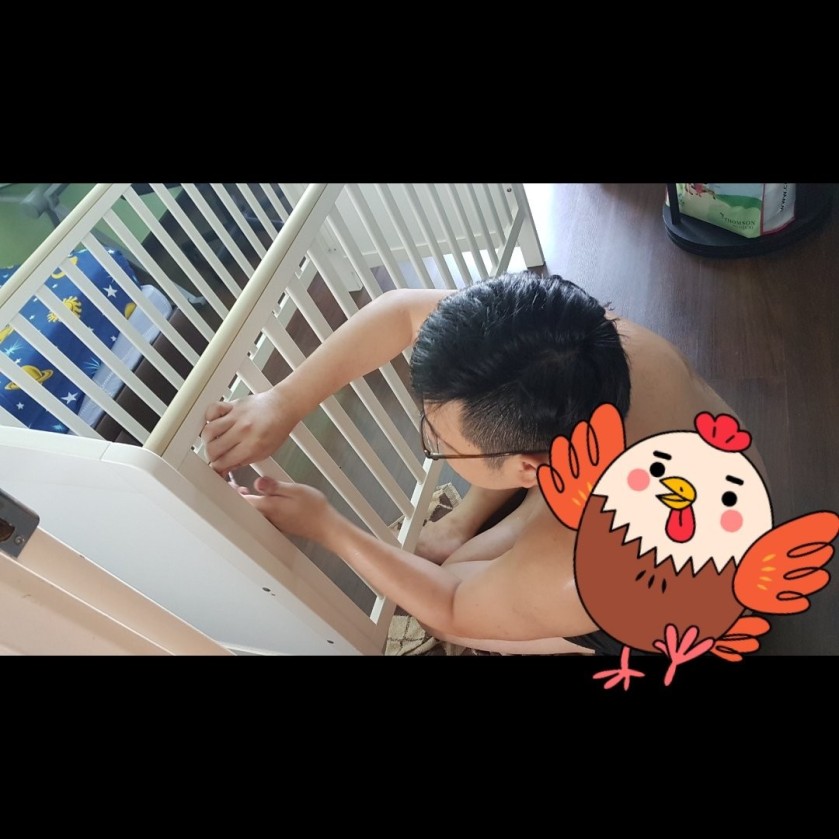 Really not nuah-sai at all. 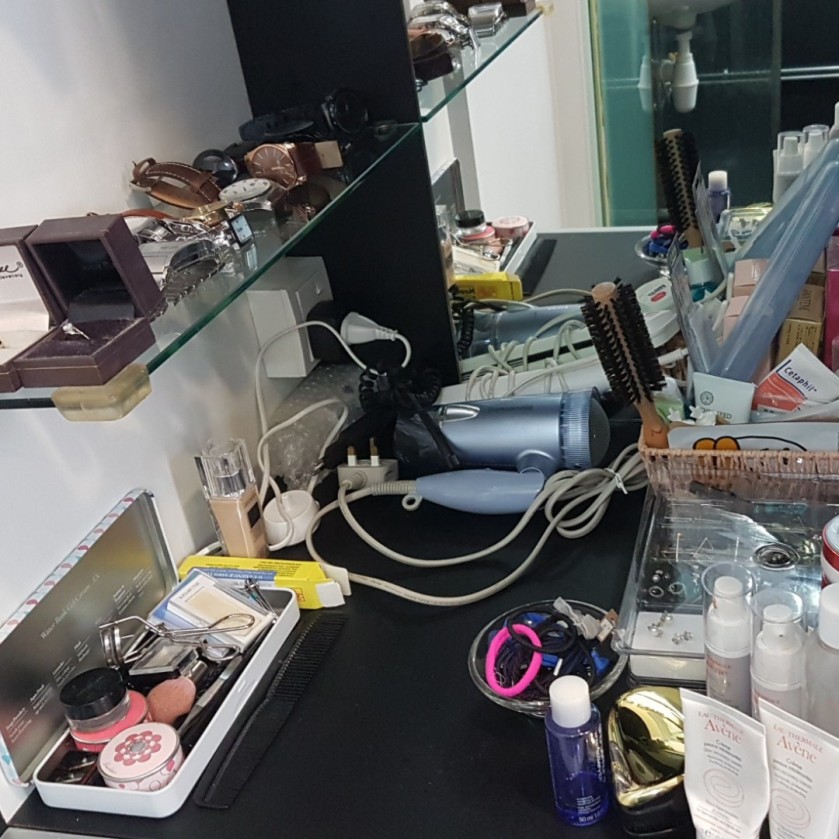 Turns out that today is more a S day rather than NS day because I received a call from Harvey Norman, who informed me that they cannot deliver Clarissa's new bed today because it is dented.

The only other available piece is the display piece, which has some scratches.

I was told to head down today ("If you have time" – the guy on the phone said) to choose another piece.

They called yesterday to confirm today's delivery and called today to confirm no-delivery, AFTER the hubs was done moving the cot bed out of the room and fixing the height of the frame to the top notch, for the newborn.

But sigh, cannot shoot the messenger. So I only said, wah so my daughter has no bed to sleep in tonight?

He could only laugh nervously and say, you quickly go down to choose again.

I told the hubs he shouldn't have named today NS Day, because we only got the S part. 😂

Heading down to Harvey Norman now.

Hope we can find a nicer bed frame for the little boss!

She was so excited about the "car bed" and kept asking us when it'd be delivered. 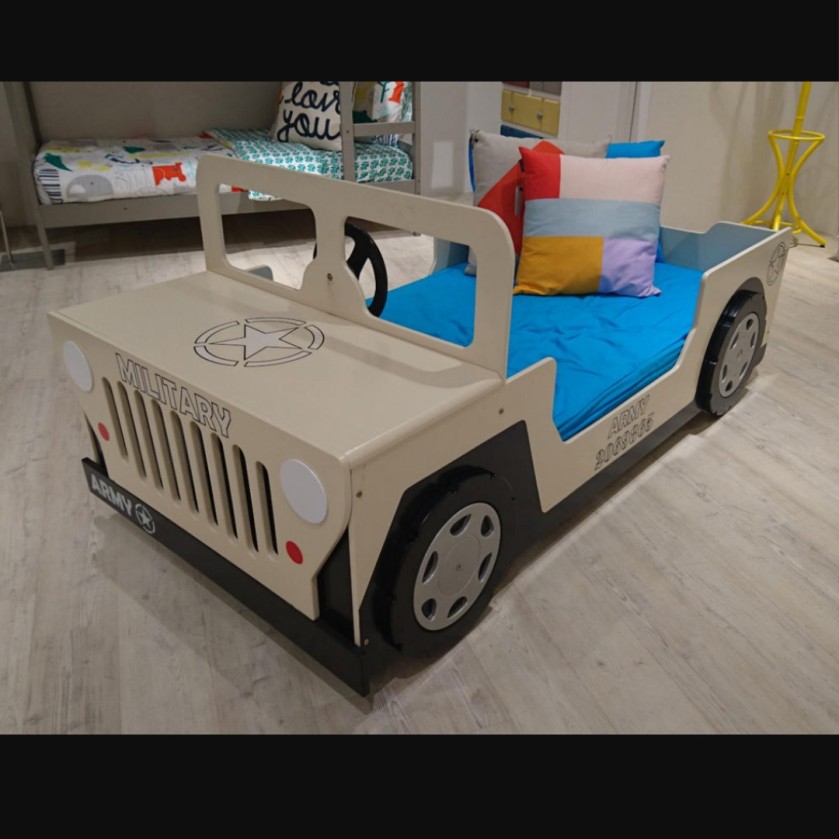 This was what we picked for her originally.

Low height, fun, not too boyish, not too girlish.

There was a pink flowery car which I showed her a picture of, and she told me she didn't like it. 😂

She said her favorite colour is blue.

Anyway we bought this jeep bed on the same day we bought the replacement dryer, the day after we got back from Korea and found that everything we needed to use to do our laundry, from clothes peg to hangers to dryer, was broken.

Went out to shop for a dryer and bought one on the spot.

Went browsing around, saw this bed and immediately thought that the little one would love it.

Only arranged for delivery much later, when things are more settled.

Oh well I guess it's just not meant to be!

Anyway we headed down and couldn't find one that was nicer than the jeep.

Out of the entire range of toddler beds we shortlisted 3 that are nice but not the most "ideal". They are of the same price and $400 more than the jeep.

We managed to get a $200 discount but couldn't decide on which one to get.

We shall let the little boss choose later when she comes home from school. 😂

So we were driving back after the little shopping trip.

薛之谦's 《我害怕》was playing over the radio and I was enjoying the song, but the hubs said, "Wahlao so weak, everything also scared."

At this juncture, the lorry in front of our car emitted a huge gush of exhaust fumes, blurring the vision ahead of our windscreen momentarily.

The hubs started waving his hand in front of his face, in what looked like an attempt to fan the fumes away.

I turned to look at him, and couldn't decide if he was joking or could really smell the fumes (I thought he was coughing a little too).

I started laughing and asked him, "Why are you fanning the fumes away? You can smell meh?"

He looked at me and started laughing too, when he realised what he just did.

Wahlao! I even held my breath!

That made me laugh nonstop for a good five minutes, until I cried and my tummy really hurt.

He must have had too much carrot cake today. 😂😂 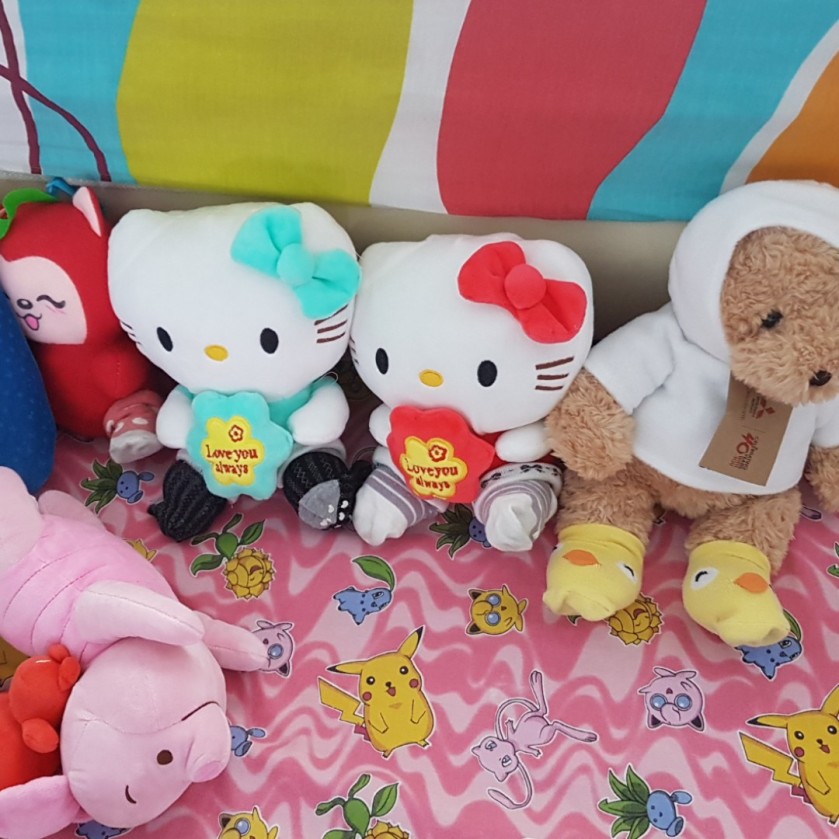 She put on socks for her animal friends before going to school this morning. 😂🤣

We picked her up from school, and gave her a quick update on the bed situation.

The car bed that is supposed to be delivered today is spoilt and cannot be slept on. We've already moved her cot bed out for Meimei. So there is no bed in her room now.

She listened thoughtfully and said to us:

Later when I go home, I will go and see! 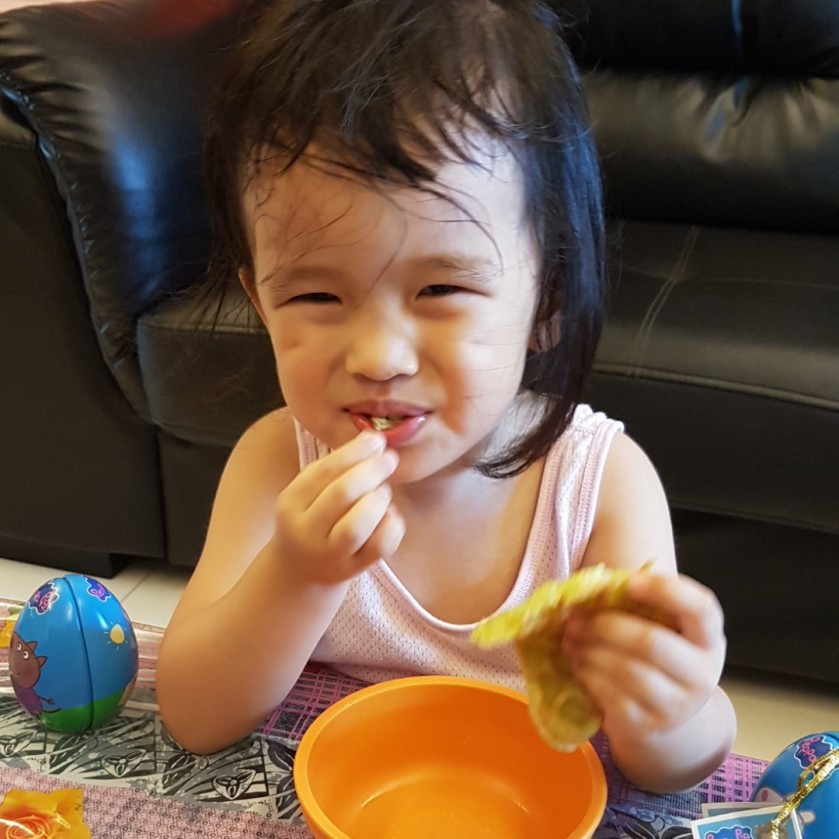 She ate her waffle so enthusiastically and even made her Daddy eat it by holding it in her mouth for him to chew off the other end of it. 😂

And then it's time for the boss to choose her bed. 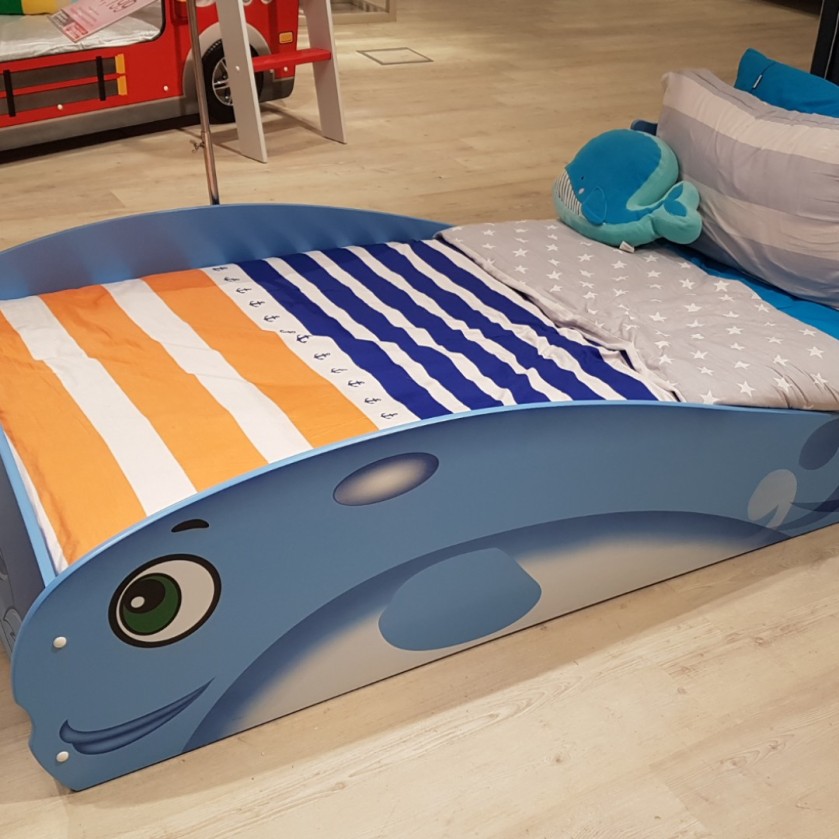 She beamed and nodded her head when she saw this. 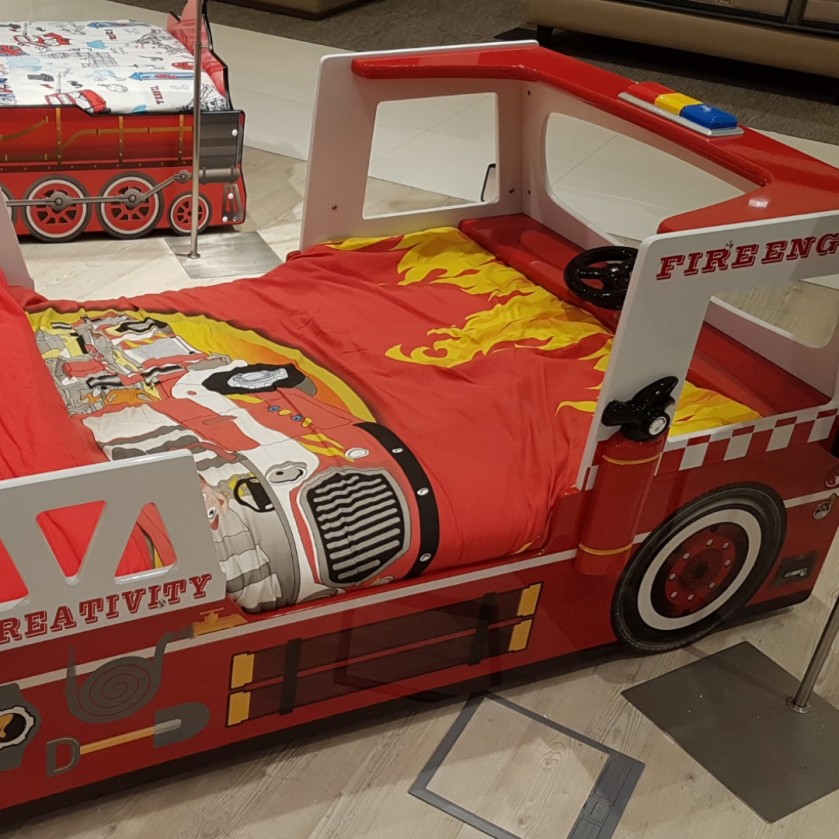 She smiled even more brightly and asked, "What is this huh?"

I guess we knew the answer before we asked her.

The fire truck is the hubs' first choice, but I don't fancy the red because it's not very sleep inducing.

I like the whale because it's cute and totally fits her room's colour scheme (blue) but the hubs is right to point out that the "unguarded" part of the bed is higher up. Risk of falling off, and awkward to get on and off the bed.

The pirate ship has a nice colour scheme, but well, it's a 贼船. 😂

So since we said we'd let her decide, fire truck it is.

I showed her the jeep too and she likes it more than the fire truck! Lol too bad.

I've already bought her bedsheets, all farm animals and safari. Hopefully that combats the red and would be sleep inducing enough. 😅😂

On a roll today because the little boss did so many funny things.

She sat her Mama duck down on one of the dining chairs beside her during dinner time and gave the hubs and I instructions on where to sit.

She'd already started eating her dinner, and she turned to say to Mama duck, "You eat properly huh. If not I'll call Ah-gong."

We spurred her along, urging her to eat properly to set a good example, and she really did eat like a champion.

And then she turned to Mama duck again, chiding her gently.

"Daddy, Mama duck is not eating properly. Can you call Ah-gong?" She was serious about it.

And the hubs really picked up his phone to call his dad. 😂

His dad responded with his usual "做么?!"

But when he heard it was his granddaughter who was looking for him, he requested for a video call instead. 😂

So we really did a video call and Clarissa pointed to her duck and told Ah-gong the duck's not eating. 😂😂

I think it took a while for my FIL to finally understand what she was doing.

She went on to show him how she was eating properly by taking a big bite of food off her spoon, and ended the conversation with "阿公，吃饭!"

LOL is it absence makes the heart fonder.

Because she was asking me earlier why Ah-gong didn't come to pick her up.

Even after the video call, she went on to press fake buttons on her palm and placed her palm against her ear.

She finished her dinner and declared herself to be "Number 1".
Daddy was Number 2 and Mummy, number 3. 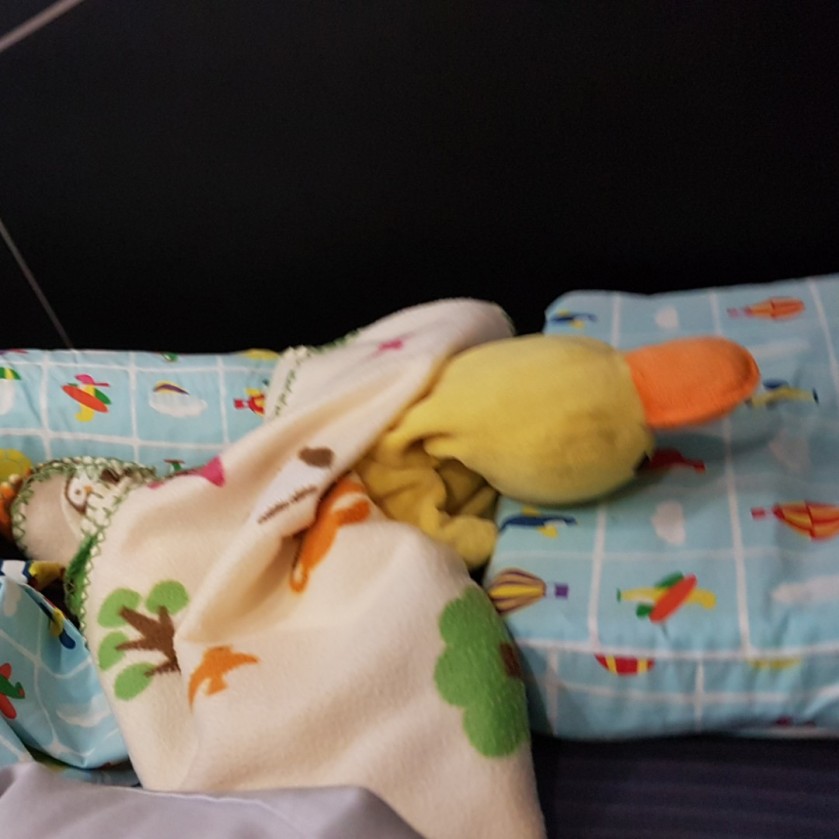 She lugged her school bag and sleeping bag into our room, took out the pillow, bolster and blanket she uses in school, and tucked Mama duck in bed.

Hahaha what do we do with her?

She was drinking her milk while the hubs helped to massage my feet.

She stopped drinking and asked her Daddy to massage her feet for her too, because "my leg pain". 😂

We can't quite believe we have to go to work tomorrow.

But there's so much on my mind right now.

We've kinda sorted out the sleeping arrangement when xbb arrives, but there is no cabinet for her stuff yet. And no visible space in the study room to hold a cabinet.

Might have to move one of our desks around.

Right now there's really no aesthetics to speak of, just whatever goes. 🙈

My back and hips are really getting bad especially in the past few days.

I can't seem to find a comfortable position.

The last physiotherapy session went well but sadly the effect lasted only a day. Even though I've tried to move around, the back to back meetings really just killed me.

My tummy also feels bigger and heavier as compared to the same # weeks I had Clarissa.

There might be a work trip coming but I'm not sure if my back can take the plane ride.

My heart wants to go because it is the last project I'd like to see through before I go on maternity leave.

But I don't know if my body (and baby) would allow it.

Guess I'll have to take things as they come.

I actually feel a little sad and very frustrated about this hip/back situation not only because it is painful, but because it makes doing the simplest things like helping Clarissa to get changed, or just sitting down to play with her very difficult.

Sometimes I yelp in pain after making the wrong shift or after sneezing, and I can't stand myself.

Feels so whiny and attention seeking.

Even though I really don't want to react like this. 😭