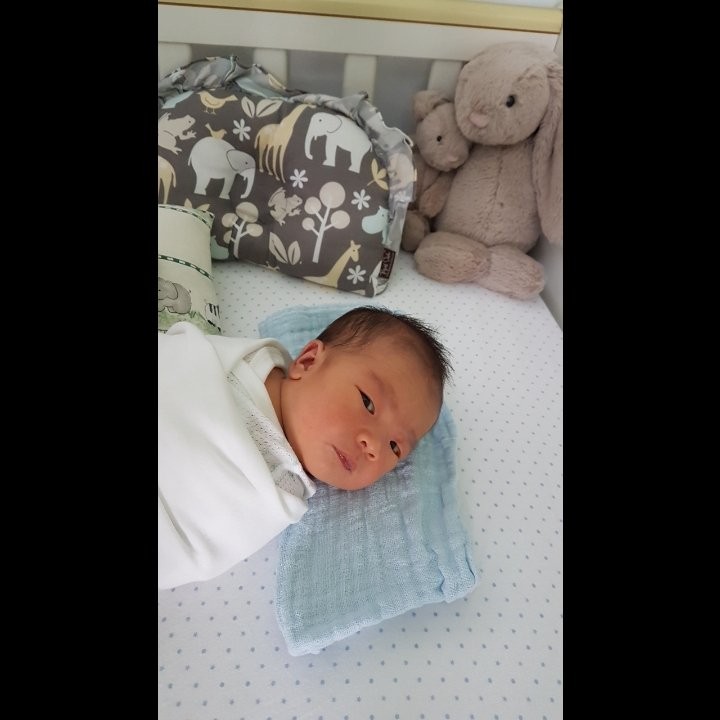 She somehow turned to look at the camera. 😅 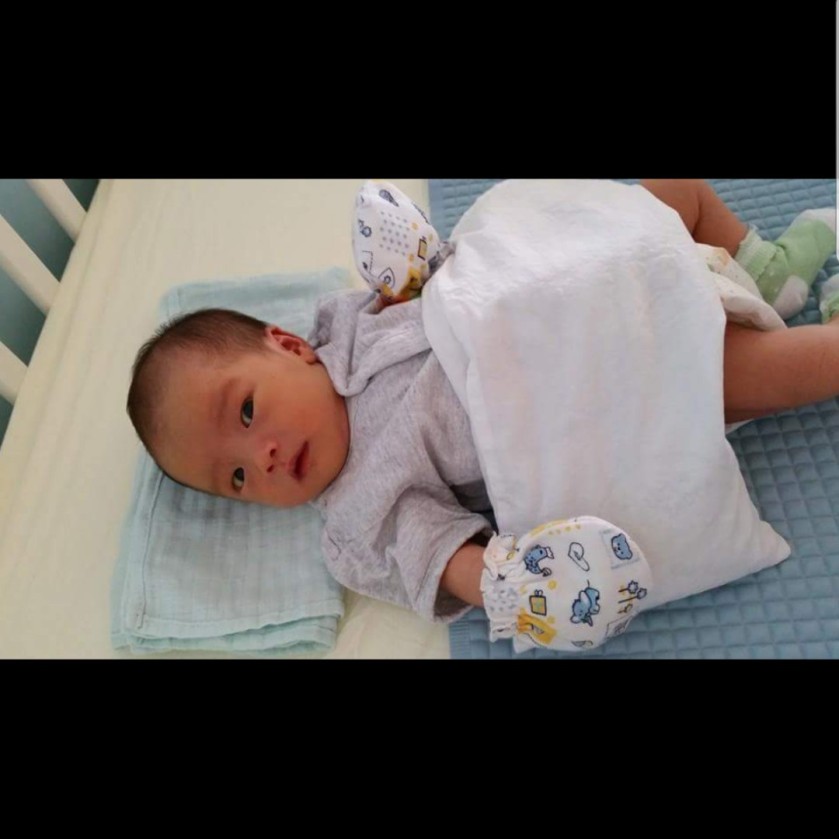 It's been a week of adjustment, and 5 days since we came home.

We know for sure she's a milk guzzler, and likes to be carried.

I've been trying to ask the confinement nanny not to carry her to sleep. They sometimes fall asleep together with her cradling the baby. 😰

I've been paying more attention to the big little boss, and erm the whole 3-hourly pumping business.
Not sure how it'd change when the confinement nanny leaves, but I guess I'll worry about it when the time comes.

After the bad start to breastfeeding/pumping, the hubs and I have set the limit.

Ultimately this should not be at the expense of the overall well-being of the family.

Supply is good – I can manage 80-90ml per pump now – but the 3 hourly pump is not going to be sustainable when the confinement nanny leaves.

I'm constantly in zombie state because I have not slept for more than 2 hours straight in the past week, except for the 2 nights in hospital.

So I guess we have to work around this and find the best routine for everyone at home.

I need to be kinder to myself, and be considerate to the hubs and the 2 girls.

The little boss woke up on our bed happy while I woke up feeling like I had not quite slept.

I went down to get breakfast from McD, watched the news on TV and went to the toilet.

Wiped and saw some brown discharge. 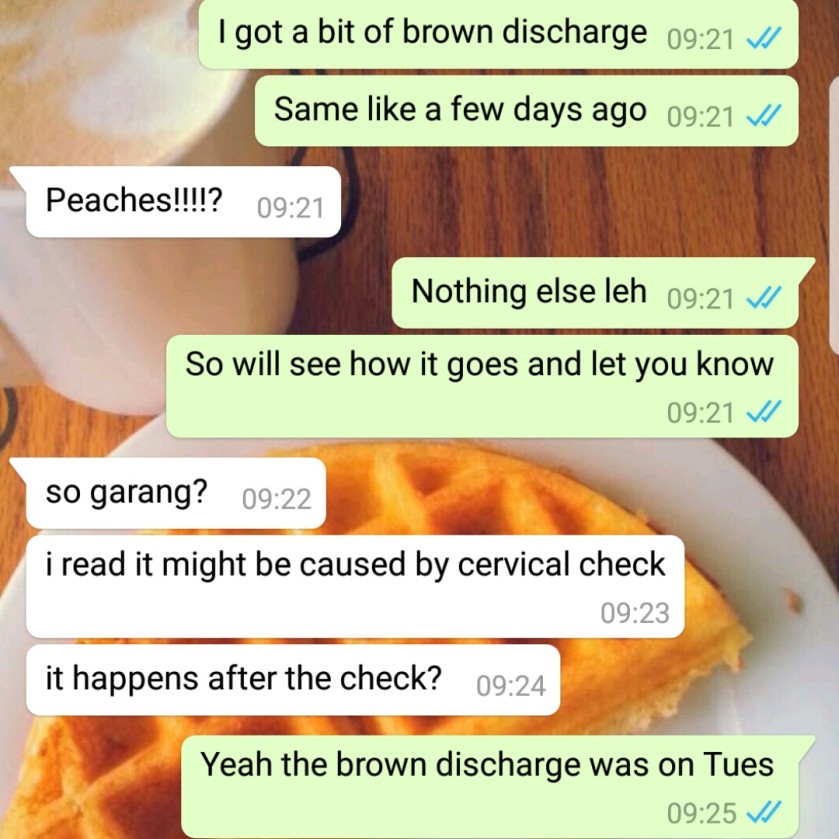 Told the hubs about it.

But yeah I didn't think it was anything urgent since it wasn't like the fresh blood I saw on @weeirdism:270917

I had a little bit of brown discharge after the checkup on Tuesday but nothing for the next two days.

The day went on as usual and there was no more discharge.

I got a prenatal massage around 1230pm. It wasn't the strong type of message, just comfortable enough for me to take a much needed, long, 1-hour nap.

Before I napped, the hubs checked on me again and I said nope, no more brown discharge.

Woke up from the nap and the little boss came home. Her Bff Auntie O came and I went to take a shower around 645pm.

That was when I washed out more discharge.

Told the hubs about it, but still no urgency. We could decide after Clarissa goes to bed.

He was out for dinner with his friend while we had dinner and ice cream cake celebration.

Checked again at 8pm and this time the discharge was really coming and I put on a panty liner.

I was starting to feel slight cramps but it wasn't painful. I think I even told my friend calmly that we might go to the hospital tonight.

Long story short, we decided to head to the hospital after Clarissa slept.

It was 10pm by then and the discharge was still coming.

No point calling to ask or trying to count contractions because I didn't know how to. 😂

Best to just get checked and even if we are asked to go home, better safe than sorry.

We drove over and I was texting my sisters about it. It started to rain and the hubs remarked, wah 可以不要这样drama 吗?

Which basically was exactly what happened in the next 14 hours.

By 1030pm I was hooked up on the CTG and did the first urgghhh cervical check.

There were some contractions, but irregular.

The medical officer asked the hubs to proceed with the registration, because this is our second baby and she expects that things should happen faster.

But at 11pm, the CTG started reporting very high heart rate from the baby. Whereas the normal heart rate was in the 140-160 range, hers went up to 180-190. It was scarily high especially with the sound on.

The medical officer started off by giving me oxygen but it didn't work.

So she said sorry, I have to put you on a drip.

She suspected that the baby's heart rate was so high because I was dehydrated.

The drip hurt like a bitch but I knew I had to be put on a drip sooner or later since we need to do the cord blood transfusion.

It took about an hour for the heart rate to go back to normal and stabilise.

By 2am I was having contractions 6 minutes apart.

Hahaha 3 years later i still find this self judging pain score quite amusing.

Did another cervix check at 4am.

The hubs had already gone to rest in the lounge so he missed all the action, including the part I was given the enema and had to poop. 😂

The medical officer kept apologising to me that night.

I managed to doze off a little while the pain score climbed up.

Did yet another cervical check at 630am..

My head was screaming, how many times must I do the cervical check?
Totally not worth the pain just to find out that nothing had progressed. 😅

But the medical officer and the nurse who did the check were so apologetic about it I consoled them instead.

I told them it would hurt no matter who does it. 😂

Doctor Tham came in more than an hour later.

By then the contractions were regular but "not particularly strong".

But I was actually feeling more pain than the charts showed.

So he did the urgghhh cervical check again.

He said luckily there was some progress.

And said he'd help me by bursting the water bag.

At this point I was thinking, why can't you do the check AND burst the water bag at the same time? Why must go in twice? 😂

He then called for the ananesthetist because I wanted, no, needed epidural.

So the epidural was administered around 830am and I was looking forward to having some hot milo and breakfast.

Those were the most comforting thing during my previous, also quite dramatic, delivery process.

But 20 minutes later, I felt a very strange sensation across my chest. It was an icy cold feeling that was spreading and spreading, as if the epidural went to my chest instead.

And it kept rising and rising, all the way up to my throat.

I told the midwife about it and she was already putting something else into the drip.

She said my blood pressure had gone very low and she was giving me something to stabilise it while lowering the epidural level.

The nauseousness went away but my chest still felt like ice.

I was wheeled into the delivery suite around 915am.

The icy sensation started to move downwards but the pain my my right pelvic area got more and more intense.

I told the midwife and the nurse about it and they started to increase the dosage again seeing that my blood pressure was normal again.

But the pain got more and more intense I felt like my pelvic bone was getting crushed.

They asked me for the pain score again and I said it was 8-9. But in my mind I thought it was 11.

The pain was so excruciating that I was even tearing uncontrollably. It was also coming very closely apart so I almost had no break in between before the next wave came.

I was 7cm dilated by then and they explained that it might be because I'd progressed from 3 to 7cm so quickly that the epidural couldn't catch up.

I could already feel the baby's head coming down.

The hubs tried to distract me by dancing in front of me? Lol but honestly I had no mood for it.

They consulted the ananesthetist and did some adjustment including shifting me to the right side to (presumably) allow the epidural to flow.

Luckily it finally worked.. Because I could feel the baby's head moving down and it was getting lower and lower.

The midwife did another check and confirmed that I was 10cm dilated and ready to push.

I heard many stories about how much faster the second delivery would be so I thought it shouldn't be too difficult to get her out in a few pushes.

But we tried for nearly an hour because every time I pushed her heart rate would go down.

Until a point the midwife told me to stop and wait for the doctor to come and decide what to do.

I was really exhausted by then because I didn't have much sleep, or breakfast.

She got us to sign the consent form for assisted delivery, just in case.

Alarm bells rang in my head because I was wondering, how to do c-section when the baby's head is already down there?!

Fortunately assisted delivery meant vacuuming or forceps.. Which isn't as scary. But still.

The doctor came in and assessed the situation.

It turned out that the baby had her umbilical cord around her neck and her head was facing sideways.

Which explained the sudden drop in heart rate whenever I pushed and thought she should be coming out.

But Dr Tham was calm and cool as usual even though he looked serious.

He said, "Why, baby, you like necklace?" and made us all laugh before he got to work.

He said he would help me push the baby out.

So in 2 very long successive breaths, I pushed hard while he pushed the top of my tummy..

.. and I had a wailing baby placed on my chest.

It took me a few seconds to register that it was our baby, on my chest, safe and sound.

With Clarissa, I could actually feel her sliding out but with Allie it was so swift.

Dr Tham mentioned something about the cord being long enough so I guess he managed to help us get around the problem by pushing her out as quickly as possible?

But it was very scary to think about what could have happened.

So fortunate to have a calm and collected gynae who handled the situation so well.

He continued making jokes while stitching me up.

Said he wants his name on the birth cert under "mother's name" because he also pushed the baby out. 😂

Encouraged the hubs to buy more 4D numbers because he'd take a 20% cut.

All we felt was relief.

The baby is safe.

I think she has chosen a good day to come, starting on a Friday night and giving us ample time to tuck her sister in bed as well as to inform our family.

It has been a tough pregnancy and journey, but all that matters, is a healthy baby, delivered safely. 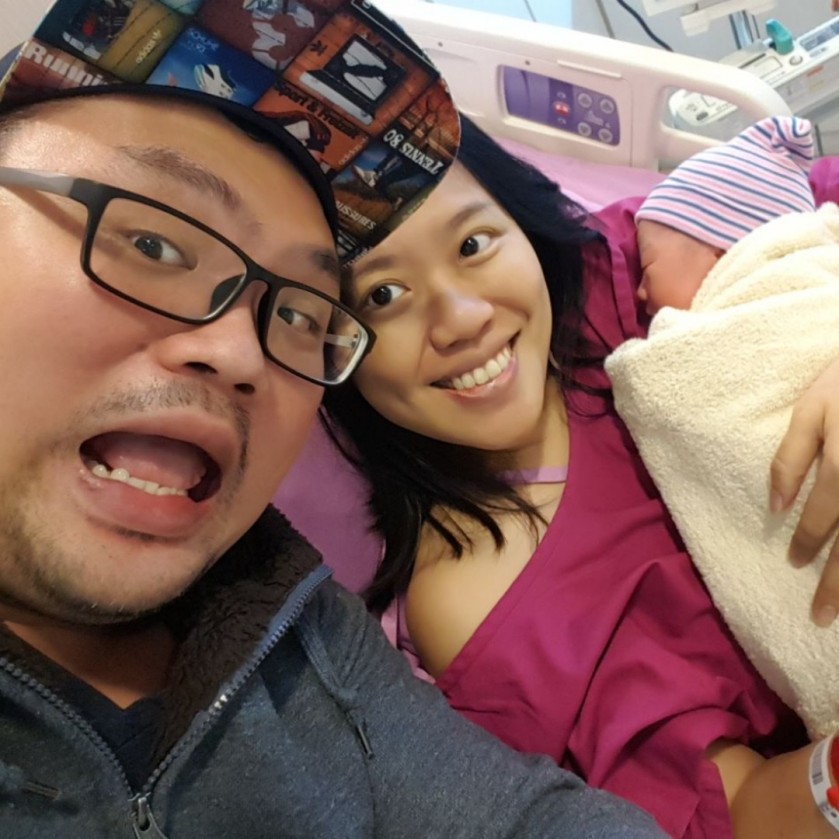 Wefie with my best pushing partner and the baby we pushed out lol.